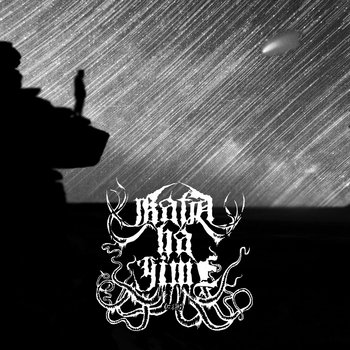 KATAHAJIME is the judo term for chokehold. This specific chokehold resembles that of a half-nelson utilizing pressure between both wrists against the carotid arteries to cutoff bloodflow to the brain. The term has also been adopted by this Pennsylvania Blackened Post-Crust quartet.

Throughout this album I get the feeling that these guys grew up with pop-punk and metalcore, and then heard Dystopia  subsequently coming full circle and combining all of these elements into a well-oiled, unique experience all their own.

The wide range of styles proves worlds of inspired influence and the group does very well to coherently flow through these new interpretations of ideas past. For example, the opening to A Bouquet of Rotting Roses Lining the Mass Graves of Humanity starts off with a very Blink-182ish sounding guitar riff...but just before I can pin down exactly which one, there is a wrench thrown into the riff. This wrench is Katahajime's originality. Even when the drums come in they are very Travis Barker-esque, however instead of building into a whiny chorus about some girl that never even mattered anyway, it rises to a chorus writhing in mental anguish.

A lot of these lyrics really hit home for me, my favorite lyrics in this particular song go:

"As i struggle i drown in a sea of shit
surrounded by a fortress I've created
A fortress built out of hate and disgust
Sorrow and turmoil, pain and distrust.
Wasting away, I become nothing"

These lyrics show me just how deeply these guys are affected by the uncertain, changing world around us and they aptly deliver these emotions wrapped in musicality that I can only describe as Crusty Pop-Punk.

Although this might not be appealing to many listeners, I really respect what Katahajime have done with this sound. They took what was once used as a tool to inject false worry and draw attention to many ultimately trivial trials or tribulations, made it sound meaner and attached lyrics that are deeply affected by the bullshit that comes with existing today. They really channel forth that desperation and hopelessness one arrives at when they start learning the dark side of what happens in our world.

My absolute favorite song on the album would have been Night Terrors...but Struggle just bumps it out by containing my favorite lyrics for the entire album:

These lyrics really resonate with conclusions I have made in my own life and I am sure thousands of others everywhere can relate to this as well. We live in a world where the majority of everyone is so focused on face value, they expect that everyone is the same, that because one person can defeat their depression, everyone can and should. When people meet one another and someone seems a bit odd, their first thought usually leans toward "what a weirdo" rather than "I wonder what could have happened to shape those mannerisms" and sometimes those things that happened to shape those mannerisms are never going to go away no matter how much time, energy, money and medication is thrown at them. As much as it sucks to know others struggle with the same shit, it is equally as comforting especially when the music matches the feeling so well. Where I think screamo and pop-punk failed to utilize their voices for anything other than narcissistic revelry, Katahajime has corrected this travesty.

This album is well worth the $5 they have it up on their Bandcamp for and was followed up by a tape release for the Summer Tour which I can't seem to find anywhere to buy it so it probably was just that, a Summer Tour tape that if you weren't lucky enough to catch the tour you are shit out of luck...but can listen on the bandcamp!