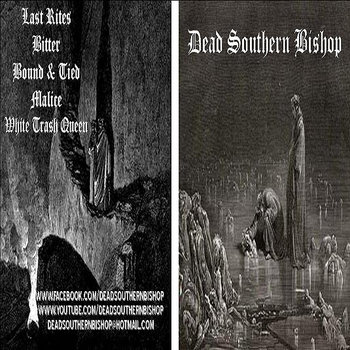 Dead Southern Bishop look a lot like they sound, like they could think of a million fucks to give but don't even bother, because who gives a fuck?

The tone sounds like a darker Eyehategod, Incorporating Phil Anselmo esque spoken word which is interrupted by the dominant Mike IX style screams.

They absolutely nail the wooly, woody sound on Bitter. This song greets you with a hellscream that is quite disconcerting, the vocals that follow on this one are reminding me a lot of Rwake.

Malice sounds like the guys got really chiefed one night while watching Up in Smoke, and during the music sequence at the end someone decided to start blasting Slayer, the four(or perhaps it was at a time when they had 3...) must have looked at each other like Shaggy and Scooby had just learned the location of some scooby snacks and ran straight for the band room.

DSB does a perfect job of creating a huge Dirt wall, especially on Bound & Tied and White Trash Queen. If you really listen closely, you can hear different variances in grit coming from the Left, Right and Center...then when you blur your focus, they are cemented back together into one huge wall of wooly perfection.

White Trash Queen locks into a huge sludge groove at half time as a verse, then at standard time as a kind of chorus which ends up being a really awesome effect. I have heard many bands utilize the age old trick of Chorus being a backward Verse...but this trick works wonders for a listener like myself. Ending in a very sludgy breakdown that makes me imagine Thou adding about 30 bpm to their standard pace, this album has left me in very good taste.

The guys are endorsed by a kickass string company called Knucklehead that makes strings in WTF DOOM sizes for a very low price. I for one will definitely be giving these strings a shot, before switching to huge strings I always loved the sound and feel of the hexcore strings by DR, a luxury that this small company also utilizes within their humble means.

Dead Southern Bishop are one of the purest forms of Sludge I have heard in a long while, commanding a sound all their own while still paying homage to those before that built the sound into what it is today.

These guys have a good groove going in more ways than one, I believe they totally belong on House Core records. This is one of those bands where I don't care how often they release or the quality of the release, I will be watching, waiting, listening and sharing.

Hymns Of Malice And Discontent is available as a free download on their bandcamp.