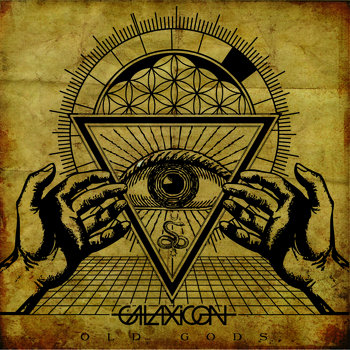 Yet another band in my absolute favorite configuration of all time: The Power Trio. Black Sabbath, Sleep, Yob...for some reason the legendary heavy bands seem to favor this configuration, there is just something so inherently badass about 3 people sounding so heavy and huge, especially when it sounds more brutal than your average dual guitar band. Memphis Tenessee's sludgy psychedelic Lovecraft worshippers, GALAXICON, have obviously been paying attention

The three are a very dark sounding trio indeed, the only brightness to speak of early in the recording(other than what it took to piece these compositions together of course) comes from the cymbals and vocals.

Serpent Saviour introduces the dominant, raspy vocals. These high screams are definitely unique. A specific type of delivery I have not yet encountered in music, they are comparable to Jason Landrian of Black Cobra's vocal tone, but I know for a fact he uses some pretty hot gain to get that sound so i'm imagining this is a more natural approach. The piercing shrillness of it cuts through and above everything else perfectly.

The lead tones are very smooth, im thinking neck pickup with some tone rolled off which fits like a glove with the barky, buzzy rhythms.

I am loving those high screams more and more with each song, especially Pyramid of the Sea. This song feels very Motorhead, switching between a fast paced gallop and a stomping march, simultaneously switching between excitement and reverance to the Old God rising until you are greeted with a climactic ending that sounds like Iron Maiden if they hung out with ZZ Top regularly

Snake Oil starts off at a crawl with a tom/snare cadence rolling along much like a snake. This is where the Yob/Neurosis influence is apparent. The opening riff is very much what I could imagine a collaboration between the two ending up as. The delay around 2:00 is reminding me a lot of Xasthur tone. The phaser on the end of this song has to be a phase 90...and because it sounds so damn similar to Mike Scheidt in Yob's use of this pedal...I am gonne predict that the guitar player plays a Les Paul through a Marshall head. This has to be my favorite song all around: all tones mesh well with eachother, heavy crushing riffs, wretched filthy vocals, and an age old lyrical concept that is very relevant to our day and age. Heed not the words of the Snake Oil Man!

The Key, The Gate, The Light is where I start to see just how aptly Galaxicon names their songs. This definitely has more of that dark, etherial, forbidden knowledge feel to it than Snake Oil. Lots and lots of northwest influence in this song as it shifts between crushing Yob tinged riffs and cascadian black metal soundscapes. Something really unique about the delivery of cascadian riffs in this song is the utilization of old school d-beat like black metal blasts instead of the normative underlining double-bass with hands accenting chordal shifts.

Back to what I said about this album being very dark in tonality...over the course of this album, things tend to brighten up just ever so slightly...maybe just a few grains in the scope of a handful of sand, but in terms of tone, Galixcon are not a one-trick pony and its clear they know their rigs well. The way the synced bass and guitar drones compress perfectly together and the effortless slight tonal shifts lead me to believe these guys achieve such results through very apt control of pick attack intensity and placement as well as pickup/volume/tone knob settings which is one of the best ways to pull 12 to 24 to any given number of different tones from the same amp setting, especially considering that its free.

Even with all of the connections that can be drawn to tone, in their delivery, Galaxicon are totally unique. There is not one point in this entire album where Galaxicon allows me to immediately relate the delivery of a progression to another song in my internal music library which to me is the most valuable thing a band could ever offer.

Buy Old Gods on CD and blast it through the most powerful systems with the most speakers you can find, after all it was mastered by James Plotkin(Khanate) so you would be doing both yourself and those speakers the ultimate favor.