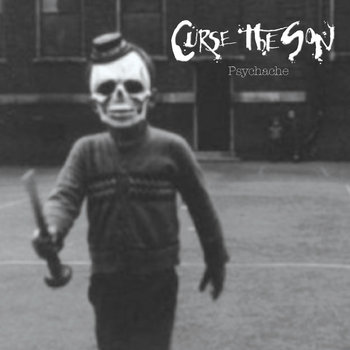 A masterful piece of Sabbath worship that was released on the very first day of this year, Psychache is the second album presented to the world by Connecticut's CURSE THE SON.

Bass and guitars all combine sonic forces to create a smooth blast of warm, hairy fuzz, following each other to a T to ensure that the sustain remains as hypnoticly coherent as possible.

The vocals are a great blend of 70s rock falsetto with some stylings from 90s Grunge and Alt thrown in as well. They remind me a lot of the vocalist from Royal Thunder, but male, as well as containing hints of Jus Osborne in there.

Saying goodbye to Henry Aslinger is a bittersweet experience for sure, in that it has this air of unease, of a lurking darkness behind the tone wall...then when the Spider Steals your Weed, CTS let you know that its all gravy baby, just ride the fuzz and it will all be fine in the end.

I now have a Psychache which is giving me visions of tribal drums coupled with mouth harps, these riffs blend together so smoothly, and rip roaringly I feel like this is something I should have taken a Valium for? For no other reason than to just sink even further into the thick fuzz than my current state of stoned will allow, to get right up close and personal with those hammer pulls.

As the valium makes its way into my system, with tremolo picking that has such tone, it chugs...I realize the proper head med I should have reached for was a Soma. Curse the Son graciously provides this Soma at no extra charge and delivers unto me my favorite riff of the album with some sinister horror lyrics to match "this is where the nightmares go to find you when your all alone". I would be scared if it weren't for the valium and soma that were donated, but I know that these nightmares are friendly by now.

Now that the nightmares have passed, Curse the Son believe that I am ready to know the secrets of the Negative Ion...I don't know if I am, the opening bass line has me shaking in my boots with an ominous crawl that is reminiscent of the clean interludes in Dopesmoker, when the fuzz kicks in finally, its like a souped up version of one of my favorite riffs of all time: Electric Funeral. This fact alone and The Negative Ion has stolen the show for me, to be able to incite the memory of two legendary songs while also retaining originality is no easy feat, and its a balance Curse The Son seems to be at home in.

In a world where Sabbath worship runs rampant, Curse the Son stand apart by delivering it with conviction, style and coloring the riffs with some individuality.