Day of the Shred: The Observatory, Santa Ana CA 2014 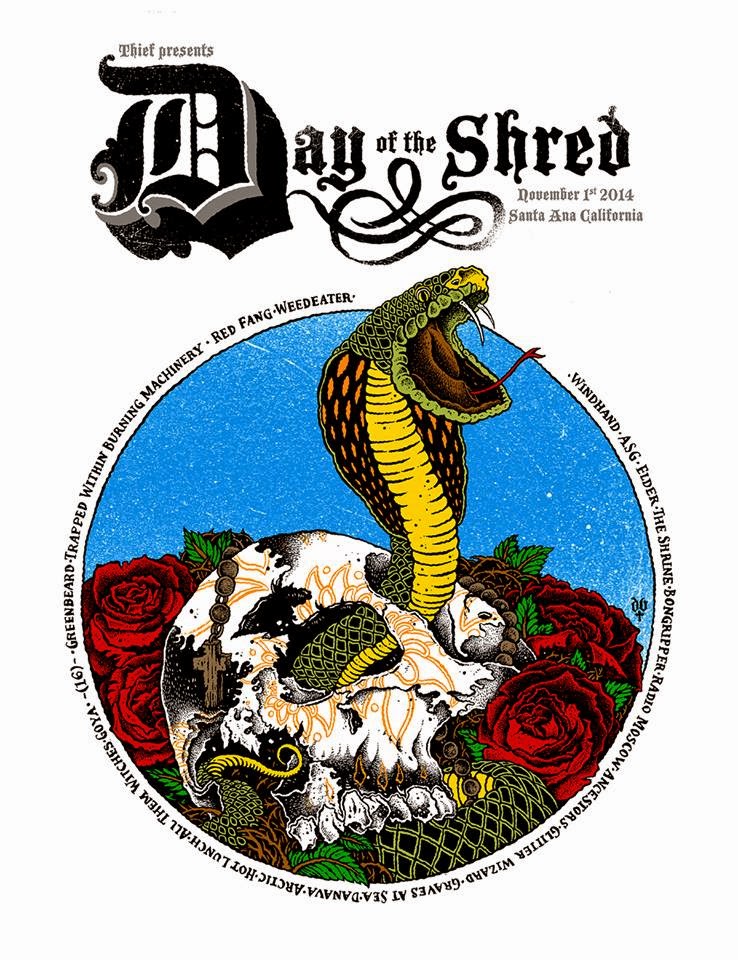 This last weekend I had the honor and privelege to attend Thief and Midnite Collective Presents: Day of the Shred at the Observatory in Santa Ana. The line-up featured many of the heaviest bands to grace this grey earth in a two-stage festival format that was perhaps the best setup for an indoor fest I have ever attended. No ins-and-outs? No worries! Plenty of outdoor space and food available right on the grounds. If you were of the lucky few that received VIP access, there was free beer, food and a booth setup by Earthquaker Devices where you could check out their entire lineup of amazingly useful and unique pedals. The fest was a great time overall, but due to the haziness of the day I will be covering a couple of the most memorable bands to my experience.

After drinking some of the free beer and smoking a joint with a couple of the dudes in Bongripper while discussing tone and checking out the pedals on display, I made my way in for the first act I would witness of the day: Trapped Within Burning Machinery.

This incredible 5-piece from Southern CA was the only band of the day to feature 3 guitarists. While some might scoff and ask what a band might need 3 guitarists for, watch the video above to see for yourself. Employing 3 of the most distinct amps for each guitarist(Laney, Orange and Marshall), with one of the 3 guitars being a semi-hollow really created a huge, well-rounded layered sound for the band. At most points you could observe one guitarist playing low on the neck, one in the middle and one up high...this approach coupled with the amps and guitars of choice created a wall of sound with individually moving parts crossing paths over the coherent whole. Massive riffs made way to crest-fallen passages of utter despair with shrieks of defiance soaring above it all.

A few rock bands and many joints later, it was finally time for the moment I have been waiting an immeasurable amount of time for, the moment that Bongripper would play their first show in California which would also not ironically be my first time seeing them live. No amount of prior context could have prepared anyone in the room for what was about to happen. After a cursory check of the back-line equipment they were allotted for this performance, the guys took their places and started building to their initial apex of destruction. We lit up a 5 gram joint and passed it around, the rest of the room was also erupting in plumes of herbal fog in every direction. Just about when everyone was high enough, they ripped the rug out from underneath our feet and blasted the entire room in a bath of grimy sub-frequencies. I was a little bummed to have to see Bongripper without their self-curated back-line of destruction, but the moment they hit the first note I knew it didn't even matter, this is the type of band that knows exactly what the fuck they need to do, and how they are going to do it regardless of what they have to use. Their tendency for slow tempos played in F standard created a time-warp in which the hour that they played felt both like a mere 10 minutes but also like 10,000 years of riff-mastery jam packed into one illusory moment, the entire audience bowing their head in reverence to the rhythm of the madness around them. The lack of vocals or any high-end other than the snare and cymbals in the mix whatsoever made it impossible not to wholly immerse ones self into the experience. This was one of those performances that embeds itself deep into the fibers of ones existence, an experience that will be looked back upon fondly by the majority(if not all) of those lucky enough to bear witness. A meta-detail of the set that shows just how rad Bongripper are on every level is that the succession of songs was: "Endless", "Satan", "Worship". Enough said.

After Bongripper thoroughly re-programmed everyone's definition of Heavy, I caught a few songs of Ancestors'. While the set was coherent and executed flawlessly by all members, there was definitely a disconnect between how they sounded live and how they sound on a record. I'm not sure if it was the gear they had to use, the mix-engineer, or just a fact about Ancestors, but something just didn't sound the same and the bass seemed to be overpowering the guitars and the keyboards were pretty much non-existent in the mix. In light of all this, i'd be interested to check them out again on a smaller bill to get a better measure of them in a live setting.

Up next was Elder from Boston. Having seen Graves at Sea earlier this year I opted to catch this band whom i've been listening to for a few years after the memorable nature of their riffs started swimming around in my mind regularly. Out of all the bands that played for the day, Elder seemed to get the most out of the back-line equipment for their intended uses as their mix was absolutely perfect even with the guitarist switching between lead and rhythm regularly. As far as lead guitar tones go, the best of the day goes to Elder since they displayed the best of both bright bridge lead tones and warm neck lead tones to their fullest extent while retaining a cutting clarity with each note. Elder's songs are so memorable that I haven't even sat down and listened to them in a good while and was still able to pick out songs I knew in the set.

Windhand followed Elder, and while being my second time seeing them this year, I was glad to get another chance after some very unfortunate issues with the Scion backline earlier in the year. This is another fine example of a band that will make any quality backline work for them. Flawlessly executed set, a journey into the riff-filled land facilitated by roaring mids, crushing bass and wails of an entity beyond. There were times I have seen Windhand where a couple of the songs were too similar to eachother but this seems like something they have since smoothed out(perhaps it was the length of the set?) as the set felt like one coherent introspective journey shifting it's character every so often just enough to shift the scenery slightly. Great mix this time around, undoubtedly the best live mix I have heard of the band in the 4+ times I have seen them at this point...prior to this the week points in the mix would have had to be the vocals and drums but whoever was manning the board this time did perfectly and gave much justice to their sound.

The final band I watched for the evening was Weedeater. While setting up, they seemed to be having issues setting up a bass rig for Dixie, after some time figuring that out they were all set to go and Dixie addressed the audience: "Hey Motherfuckers! Were about to do this, forget this shit! Welcome to band practice assholes! We're Weedeater..we came here from North Carolina and we fuckin' suck! Get your goddamn money back right now!" then they got down to business by jumping straight into "Hammerhandle". Despite the issues beforehand, they proceeded to play an incredible set including the songs "God Luck and Goodspeed", "Monkey Junction" and their Lynyrd Skynrd cover "Gimme Back My Bullets"...all of which are songs of theirs I happen to hold in the highest regard and were just as rad as ever even having heard them live and listened to an innumerable amount in the past. Once the set was over, Dixie walked straight back to the Ampeg SVT that was causing problems at the beginning(and at this point i'm imagining was bothering him during) picked it up off the cab and hucked it across the stage as far as one can huck a 100 lb amplifier. I have seen problems like this with amplifiers at fests with back-lines too many times to count at this point and I suspect it is due to running an amp for a straight 8 hours with no breaks between. Thus, if you run shows where bands are going to be sharing tube amps for the duration I have a suggestion: Just pop for the extra cash and rent a duplicate of each amp rotating them in if a consecutive band wants to use the same amp...I have a feeling this will save a lot of time and headache for everyone.

Overall this is THE BEST festival experience I have ever been in attendance for. Every band ruled in their own way, the grounds were spacious and setup perfect to accommodate everyone, security was chill and the sound of both stages ruled. Thank you to all the bands and invisible hands that played a part in providing us with such a memorable experience, here's hoping it continues on into next year!

All video contained in this post taken by and courtesy of: Arturo Gallegos aka sexthrash69