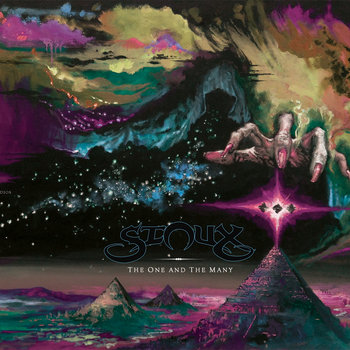 The One and the Many is one of the most well-rounded, fully realized Self-Releases I have listened to in a long while. Sioux command a sound completely their own, they also manage to mesh it with stylings and composition reminiscent of some of the most successful Heavy Rock bands of our time like Mastodon, Tool, Queens of the Stoneage and Yob. Even as a band with a more accessible palette of tone and arrangement they still manage to keep that raw, honest core so often found in the darkest recesses of the underground.

The tonality of the instrumentation is very aptly ambiguous between Vintage Rock tone and Modern Hard Rock/Metal tone...so ambiguous that it tends to take the character of whichever I am imagining it to be in that moment. This is pure recording magic. Out of the lesser known modern bands of this day and age making an attempt at sprawling progressive rock, Sioux march along confidently putting the focus where it truly matters, the music, which is why I believe this album has turned out to be one of the finest examples of such endeavors to fuse different perceptions of rock music into a single cohesive experience.

This album is such a great experience, its hard for me to ruin it with words...I definitely wasn't expecting something so well put together and so atmospherically introspective from a self-release by a fairly new band, yet every time I listen I am swept on a journey that brings me from track 1 to track 6 within the blink of an eye and I am left wondering where I have been and what the fuck had happened the past half of an hour.

It seems the guys put a lot of hard work into the DIY release of this album, 100 hand numbered copies with each set of 25 containing a color variation of the wonderous album art. These are available for sale on their BandCamp and is sure to be an often returned to item in your collection.

Overall this album is a great triumph for the world of heavy rock music. Not only doesn't it satisfy the need for crushing heaviness, but remains listenable to the listener who may not normally be into such heavy things. A lot of times when something like this is attempted it seems very forced and fake, but the music speaks for itself and tells no lies, Sioux are doing what they love and know best, and damn are they doing it well.

Email ThisBlogThis!Share to TwitterShare to FacebookShare to Pinterest
Labels: 2014, Hard Rock, heavy, Mastodon, Queens of the Stoneage, Sioux, Sludge, The One and the Many, Tool, Yob
Newer Posts Older Posts Home
Subscribe to: Posts (Atom)