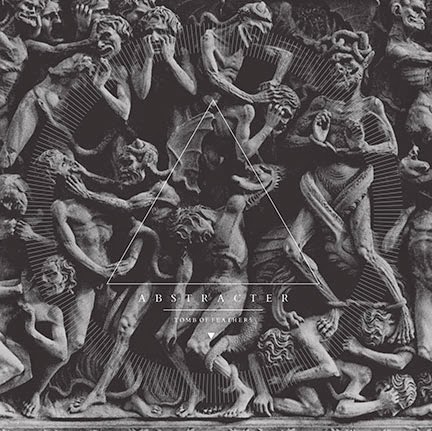 
Hailing from Oakland, CA, Abstracter is a 4-piece Sludge band killing it in every facet of their approach. While Tomb of Feathers was released in September of 2012, it finally made its way to Vinyl(the format it belongs on) in April of 2014.

The album starts with the ominous sounds of plumes of expanding thunder and rain drops striking the earth. Once I am thoroughly immersed in the soundscape, alone and drenched in the desert rain, the first riff comes in and immediately presents an approach and tonality that feel like a dark, heavy, less polished approach at Tool and Smashing Pumpkins. It is apparent these guys have an equal respect and adoration of early 90s rock as they do for the realms of sludge and doom.

Alagna's clean vocals come across confused and forlorn, as if some inexplicable misfortune has just befallen him and the question why ever looms, whereas the screams come across with conviction and power, a refusal to succumb to the massive weight put on his shoulders while no longer giving a fuck why. Over the next two tracks, Alagna expands upon his clean vocal approach in the first interchanging different facets of emotion which really displays his dynamic range and talent as a vocalist.

Abstracter continually remind me of what Isis might have sounded like if they had continued the style they started breaking ground on in Oceanic with the raw production style of the albums prior. Being Analog purists, Abstracter recorded this entire album live, reel-to-reel with tube amps which really makes this album feel alive. That's right, you did know you can track albums live right? Not just one instrument at a time and YES, listeners CAN tell when the tempo of a song is calculated to a T, it just sounds unnatural. Abstracter sound as natural as it gets. Im not going to go into the differences of analog and digital based sound here...but Tomb of Feathers is the perfect example for why this style of music is meant for analog. I will also add that this is some of the best guitar tone I have heard in this style, the barking mid-range vintage voiced amplifiers captured on tape just sound absolutely right.

This album is heavy, straight-forward and well executed on every level of the production process. Even with 3 songs clocking in at 50 minutes, this album seems to have come and gone in the blink of an eye as the flow of it is constructed so well it made that hour feel more like 10 minutes. A compositional effect that is almost impossible to pre-determine.

You can order the newly released Vinyl or a Cassette at the bandcamp linked above, these guys slay so hard on Vinyl you should probably catch them live at one of these forthcoming dates: