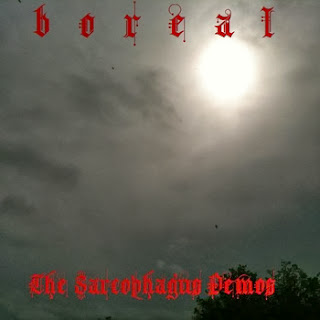 If traditional black metal is a slow, painful, misanthropic death, Boreal is a descent into an introspective coma after succumbing to the throes of hypothermia. A one man drone act from Tacoma Washington, Boreal creates cinematically ambient layers of drone using but a guitar and his voice.

The album starts off with waves of distorted drone washing over you as bits crush and disintegrate in an etherial fire. Wretched, distant wails begin to poke their head through the funeral fog, a spectre that is one with the drone instead of seperate and above. This song makes me feel as if I had comitted some unspeakable evil across dimensions and have been locked away in a celestial prison, everything is grey and bleak, I am but a sketch shifting in sprectrum between hate and disgust gazing into a solitary hole in the floor that is forever a reminder of a time and life past. Despair fills me until the walls and floor disintegrate into floods of water rushing in.

It is on Intermission that I start slowly dropping to the furthest depths of this strange dimension. The sound of glaciers is accented by distant birds calling, birds that I know full well are of a realm that will always be too close to touch. Just when I am finding solace in these familiar sounds, the rug is swept out and I have been dragged even further beneath the ice where the comforting calls of nature are replaced with the uncomfortable whispers from beyond.

By the third track I am released from my icy prison as it dissipates into a vapor that carries me through eternal nothingness while the faint reminders of the past life lurk in the spaces between. The pattern of my fall could best be described as an outwardly arcing, eliptical spiral creating the illusion that I am suspended in a cosmic field of energy on which I could float peacefully forever.

This album is one of the most poignant sonic journeys I have ever been taken on, the clear bell like ambiance with intermittent cracks and peels of distortion dance together to create an audial landscape limitless in mental and visual possibilities. It seems to me that what is being projected is pure, honest and flowing projection of its conduit...something I find can be lost easy when trying to force the ritual experience. I get the sense that for Boreal it really is a ritual, one that if not performed would bring dire consequences not only for himself but for all.

If you have ever wondered to yourself what an even mixture of Earth, Sunn O))) and Xasthur would sound like, this might be the closest you are going to get. Boreal will be releasing a split in the near future, stay up to date at the links above.