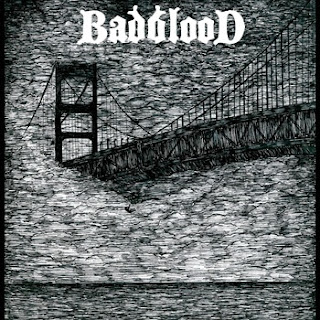 Earlier this year, Simi Valley's Badblood put out their 4th release to date, "End Me". This EP is 12 minutes of pure angry, disgustingly depressed self and world hatred to rip you straight the fuck down from cloud 9 and assure you that nothing is ok and the fact that you ever thought it was is a fucking problem ok?

The vocals are incredibly grating, Tamayo continually breathes misanthropic fire in your face for the length of the EP. The vocal tone is a quite apt amalgamation of both old school black metal and early hardcore vocals much like the rest of the tones and composition relate to these genres. If Nails were a little less Death/Grind and a bit more Punk/Black, they would probably sound similar to Badblood.

Reject opens with some bass slides that immediately have my head bobbing along, lips pursed in reverance. The shortest of the three, this is the most crusty sounding song on the album. Fall comes in as a bit more Sludgy, which leads into the final track Pale which still retains the sludgery found in Fall while adding a few more elements one would describe as Black Metal. For their sound this is the perfect arc for a 3-track album, proving that while Badblood respects those that laid the ground for their sound they are still going to do it their own damn way, I sure am glad that they do because they do it damn well.

Pale is my favorite song on this EP...its like a harder old school Metallica at times and like a sludgy Xasthur in others. At 1:53 Tamayo screams the album title in an eerily convincing manner which brings me to another thing I love about Badblood: the lyrics.

I have become a bit bored with the mass overflow of angry hate the world lyrics...yes shit sucks, and a lot of people agree...but anyone can stand there and yell "SHIT SUCKS!" at you, but Badblood offers insight into their hatred and disgust within their lyrics making the anger portrayed in the songs seem all the more real. To put it simply, they aren't trying to prove anything which adds a hefty dose of purity to their sound.

This album is what its all about for me: loud, heavy, raw no fucks given Sludge & Roll. The tonality of the guitar adds the perfect wrapper of dirt around the blasting bass, coupled with the hardcore leaning kick and snare tone and these guys are unstoppable. I have had the pleasure to see them live twice in the past year and trust me it only gets better when you are wholly enveloped by their blasts of beyond.

I have been keeping an eye on the release details for the 7" version of End Me of which there is a pre-order somewhere...and they are also currently writing a full-length for 2014 so you should probably keep up to date on that, but at this point if you want any merch, in their own words: "Go to shows. Don't be a bo-zo"