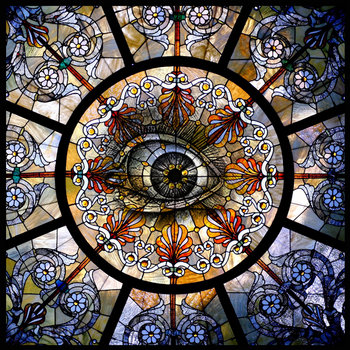 An Eyewall is the most devastating part of a hurricane, a ring of intense storms surrounding the calmest portion of the storm, the Eye. A more than apt name for the sound that they project, BEFORE THE EYEWALL are a unique experience surrounding calm post-rock passages with huge, triumphantly crushing riffs all while leaving the presence of vocals absent to create the perfect storm of introspective journey taken musical form.

In March of this year they released their self-released, self-titled Full-Length which I happened to be lucky enough to grab one of the limited 500 copies at one of their California shows. The artwork is very grabbing, an eye that seems to be awakening to a multitude of forbidden knowledge glares at you from the center of a beautifully colored, ornate stained glass window design. Drummer Aaron Oakman personally handles all design for the band, and its clear how much dedication he has when one notices that different crystalline polished surfaces have been edited into the different panes of the window design to pull off a very convincing stained glass effect.

Each song proves just how wide Before the Eyewall's field of vision is, incorporating elements from all over the doom and post spectrum with the conviction of seasoned professionals to create an experience that leaves me feeling invincible, like nothing can penetrate the Eyewall I am immersed deep within, and at other times totally lost, frail and alone when the rug is swept out from under my feet and I am left falling through a haze of galactic atmosphere that seems very familiar to the inner depths of the soul. If there is one thing I can count on, it's that the surrounding warmth of riffery will return to remind me that even though everything is nothing...at the same time nothing is everything and it will remain that way until the Sky Falls.

This is one of those bands that is impossible for me to do a song by song run down, It's hard enough translating it overrall as this really is a ride I feel like everyone should take. It is my honest sentiment that this album can be appreciated by anyone who enjoys music on any level. The instrumental factor leaves the heaviness accessible and allows more of an internal audial visual experience than normally possible with bursts of vocals butting in. The closest I can come to explaining the sound in comparisons is a guitar tone/approach halfway between Opeth and Pelican, boosted at points to Yob level crushingness.

If you are into heavy atmospheric music, this album has the potential to be one of your best allies in this life, there are still some copies of the CD available on their bandcamp and trust me, this is one of those albums you really should dedicate the length of to, get your set and setting in order preferrably somewhere where this can be blasted at full and ride the vibes.