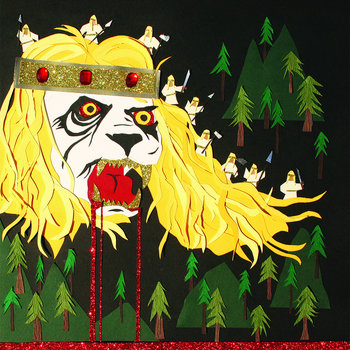 The business has once again been brought, and, as usual, it's big.

Several months ago I had the bone-shaking pleasure of seeing this trio (now more of a sludge quartet) play at a tiny bar in Portland. I woke up the morning after relieved that my ears, and entire body for that matter, had started to recover from such a night of abuse.  I also remember standing before the stage, in awe as to how three people could create such astoundingly powerful music.  Sure, it's possible to find bands who do it heavier, but Big Business does it with such conviction.  That night left me with one standout assurance: Jared Warren has the most enjoyably heavy voice I have ever heard.  I was hooked.

Battlefields Forever cuts to the chase and delivers a handful of metal hay-makers in typical Big Business fashion.  Their last full-length, Mind The Drift, with its deep, introspective aura, completely sold me on the band, and this album delivers more of what I have come to expect from the now quartet: music that is heavy regardless of what it emanates from.  It seems difficult to suggest what Battlefields offers that previous albums lacked, but suffice to say that it is equal to, if not greater than, anything  they've heretofore released.  It seems as though Big Business does what many bands hope to do, which is continue to create music that is both true to the sound they've come to be known for, and unique to each standalone album.  As a fan, I appreciate this unspoken commitment.

The heaviness of the music matches perfectly with the vocals, which, again, are both burly and beguiling.  Here, on Battlefields, I hear less of Jared singing as hard and brutally as he can, and more of him harmonizing with the flow of each song.  Exceptions exist, however, such as on "Doomsday, Today!" where his vocal prowess is released to its fullest extent; Jared's voice, especially when he lets it loose, is truly a force to behold.  Musically, the vocals are matched by Coady Willis' relentless drum battery, who, when seen live, looks like some angry octopus whose eight arms have been distilled into two.  "Our Mutant", in addition to further highlighting Jared's unbelievable pipes, makes this clear.

As a fan of music who is not also a musician, this album comes at me as a wall of unwieldy strength that doesn't let up save for "Aurum", which serves as a brief, albeit engaging, intermission prior to the seemingly heavier, more aggressive second half of the release.  At first listen I found myself atop my mountain bike pummeling some hills and taking no prisoners as the sheer force of the music compelled me forward.  This is what Big Business does for me and, I imagine, for many people.  Their music inspires one, regardless of how mundane the situation, to continue on in the often slogging march of life.  Big Business, if played loudly, can be one's ally in the fight against monotony and apathy.

The band in general delivers a unique sound that, like most good music, is hard to pigeonhole into a single genre.  Their music is definitely sludgy, catchy, heavy, and doomy, but it is also fun to listen to, especially when played loud, which is impossible for me, and most likely everyone, not to do.  Battlefields Forever sates my Big Business appetite for the time being, and the prospect of seeing them play with The Sword (yes, really) is, to say the least, something we should all be excited about.
-Mountains
at 8:19 AM